Carbon monoxide is a colourless, odourless, poisonous gas and once inhaled, it starves vital organs of oxygen. When released, it can take just a few minutes to slip in to unconsciousness and never come around. If you happen to be asleep when CO has been emitted, the chances are that you will never wake up again (this is also one reason why the general public needs to be aware that carbon monoxide “black spot” patches do not provide adequate warning about the dangers as they do not make a sound and you will not notice a change of colour when asleep!).

The X-Series of CO Alarms have been optimised for use by professionals dealing with residential CO protection. They have been designed to meet the needs of professional landlords and high demanding private individuals. For increased protection, all X-Series devices can be interconnected wirelessly to form an alarm system.

Carbon monoxide is often referred to as the Silent Killer as it is very difficult to detect and because it kills thousands of people around the world each year. The sad reality is that many CO related deaths could have been avoided with some basic precautions and a little vigilance.

Signs to look out for: 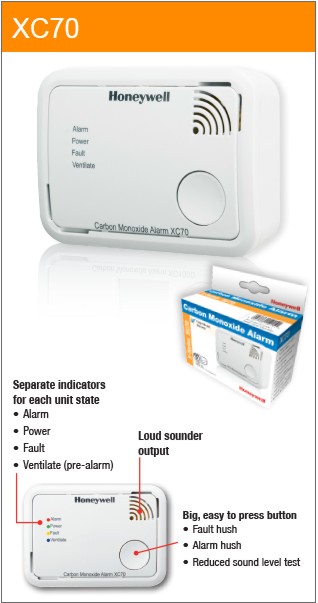 Pilot lights that frequently blow out.

Soot or yellow brown stains on and around appliances.

A noticeable increase of condensation inside windows.

Carbon Monoxide (CO) is an extremely poisonous gas that can be present in the fumes from the combustion of fuel’s which aren’t burnt under the correct conditions. Fuels such as gas, oil,  solid mineral fuel and biomass all have the potential to emit CO. The gas cannot be seen, smelled or tasted making it difficult to detect.

The symptoms of carbon monoxide poisoning

The early symptoms of CO poisoning are usually similar to common ailments such as upset stomach, tiredness and flu.

The common symptoms can include:

Carbon monoxide gas is produced when carbon-based fuels including gas, petrol, lpg, coal, oil or wood are burnt without enough oxygen and potential sources of CO are listed below:

a  gas appliance has been incorrectly fitted, badly repaired or poorly maintained

indoor use of a barbecue or outdoor heater

Mobile Gas Heaters should not be used in confined spaces with poor air circulation and make sure that you choose an appliance that meets the British or European safety standard. Damaged LPG mobile heaters can result in the production of CO gas especially if the plaques or bricks at the front of the heater are damaged, or the retaining cement is missing.

Gas Appliances should be fitted by a certified Gas Safety Engineer and it is important to have your appliances regularly serviced and maintained (serviced at least once a year). Ensure that chimneys are regularly swept (nesting birds in the chimney may cause a blockage for instance) and make sure flues and vents are cleaned regularly to prevent blockages. Rooms and appliances should also be properly ventilated (never block vents).

Install a high quality audible CO detector in your home in the area where gas appliances are located and position it high up near to the ceiling as CO rises rapidly before falling. Also ensure that the CO alarm that you intend purchasing complies with British Standard EN 50291 and carries a British or European approval mark, such as a Kitemark). The advanced Honeywell CO unit sold on this website fully conforms to British and stringent European standards.

Actions to take in a CO emergency

Flueless gas water heaters can also be responsible for giving off deadly Carbon Monoxide and can build up to dangerous levels if there is insufficient ventilation.

What to do if you suspect a Carbon Monoxide leak

Turn off all appliances, open all windows and doors and leave the property straight away. If anyone in your house has symptoms of CO poisoning get fresh air immediately and seek urgent medical advice.

Protect yourself from CO

Scroll Up
We use cookies to ensure that we give you the best experience on our website. If you continue to use this site we will assume that you are happy with it.OkNoPrivacy policy